Creativity in 2020: A History in Motion 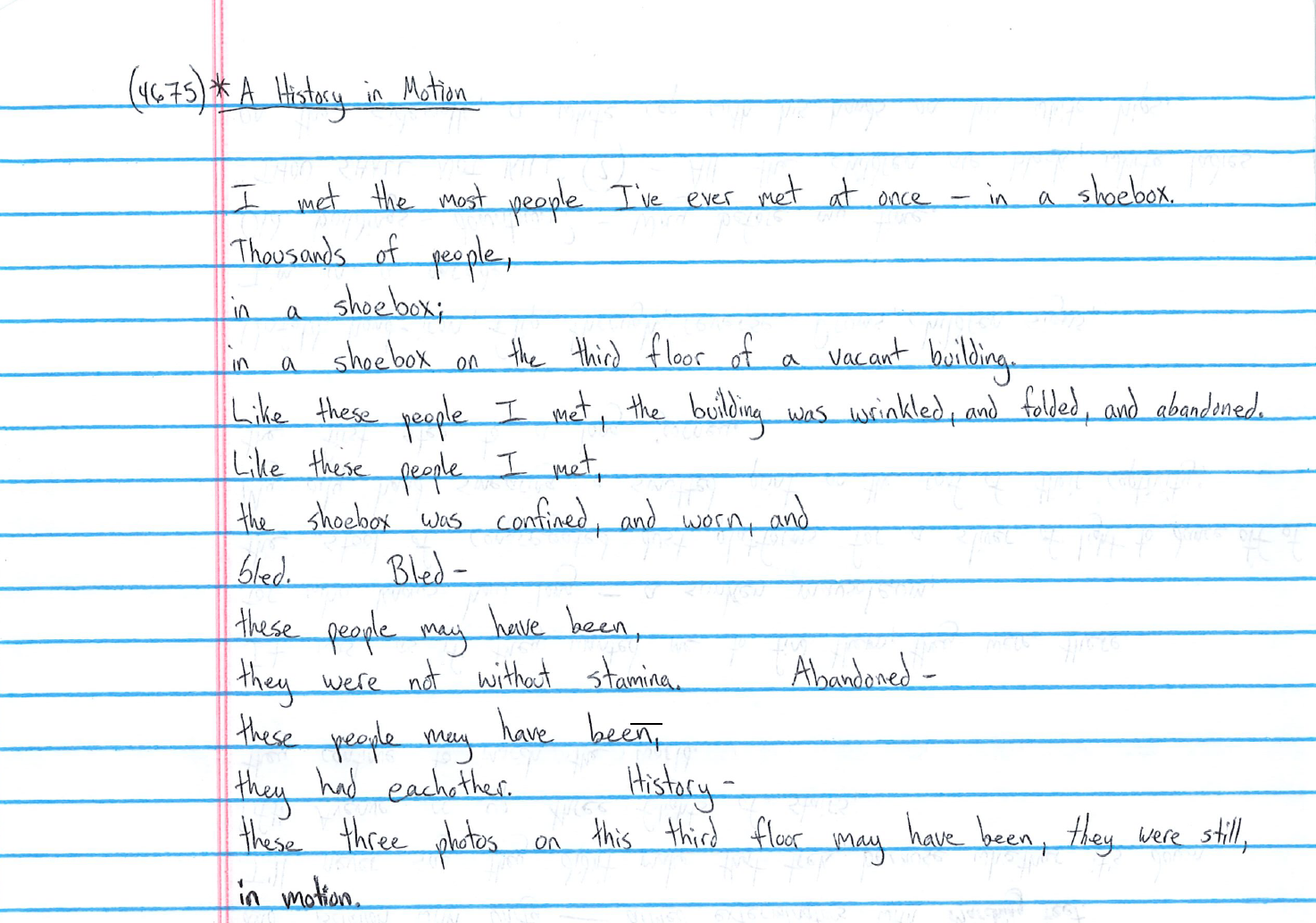 We asked Justin, poet and student at the Yale Prison Education Initiative, to reflect on creativity in 2020. In response, he shared this poem, a rich and urgent layering of past and present: “A History in Motion.”

Creativity is effortlessly quelled in institutions like this; to survive – is to be creative. What else am I to do but to write and imagine and fantasize… who else am I besides what I can create?

To read the full poem, click “open gallery” below. 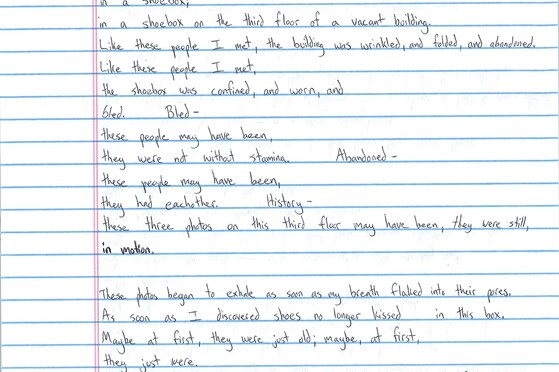 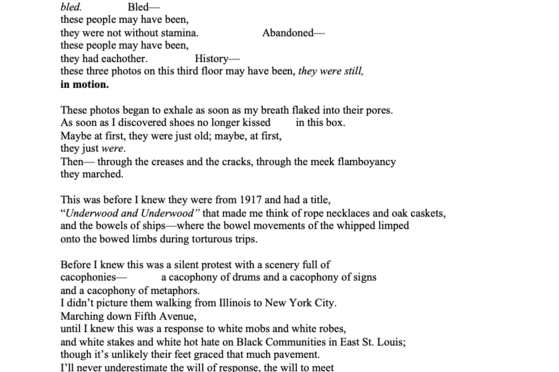 Justin’s poem references the 1917 NAACP Silent Protest Parade Photographs by Johnson and Johnson, stewarded by the Beinecke in the personal papers of James Weldon Johnson and his wife, Grace Nail Johnson.

The July 28, 1917 Silent Protest Parade on Fifth Avenue in New York City was one of the first major mass demonstrations by African Americans. Conceived by James Weldon Johnson and organized by the NAACP with church and community leaders, the protest parade united an estimated 10,000 African Americans who marched down Fifth Avenue, gathering at 55th–59th Streets and proceeding to Madison Square, silently carrying banners condemning racist violence and racial discrimination. They gave powerful witness in the wake of brutal episodes of mass anti-Black violence in the city of East St. Louis, where between 50 and 200 African Americans were murdered and 6,000 were left homeless by arson attacks. The marchers indicted the U.S. and President Woodrow Wilson, who had just pledged to make the world safe for democracy. “The Silent Protest Parade is among the most important, yet too little remembered, early events in the long civil rights movement in the U.S.,” according to Melissa Barton, Curator of Prose and Drama in the Yale Collection of American Literature.

READ “Marching Mission to Petition Congress for Progress,” an essay written on the Centennial of the Silent Protest Parade by Dante Haughton, a 2017 Beinecke intern.

READ “Destined to be Known: The James Weldon Johnson Memorial Collection at 75,” a lecture given by Curator Melissa Barton at the opening of the 2016 exhibit of the same name.

VIEW photos of the Silent Protest Parade by Underwood and Underwood in Beinecke’s Digital Library. 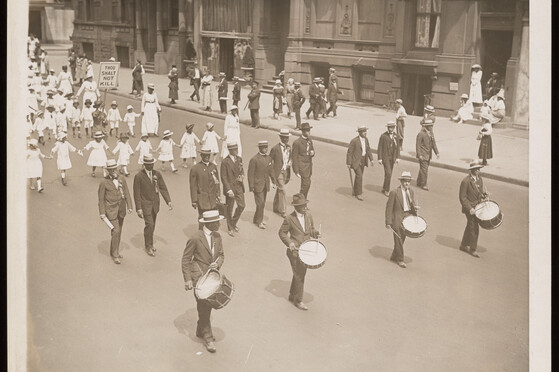 MORE ON THE AUTHOR

Justin is a student and writer enrolled in the Yale Prison Education Initiative. He is incarcerated at Macdougall-Walker Correctional Institution. His work has been published by the Yale Literary Magazine. He is in constant pursuit of all the things that make him feel ‘alive’ and hopes his creations honor the family and community that awaits him.

READ two poems by Justin in the Yale Literary Magazine, “Endless,” and “Landscape”.

READ an essay by Justin titled “Corresponding For My Life,” featured in a recent YPEI Newsletter. 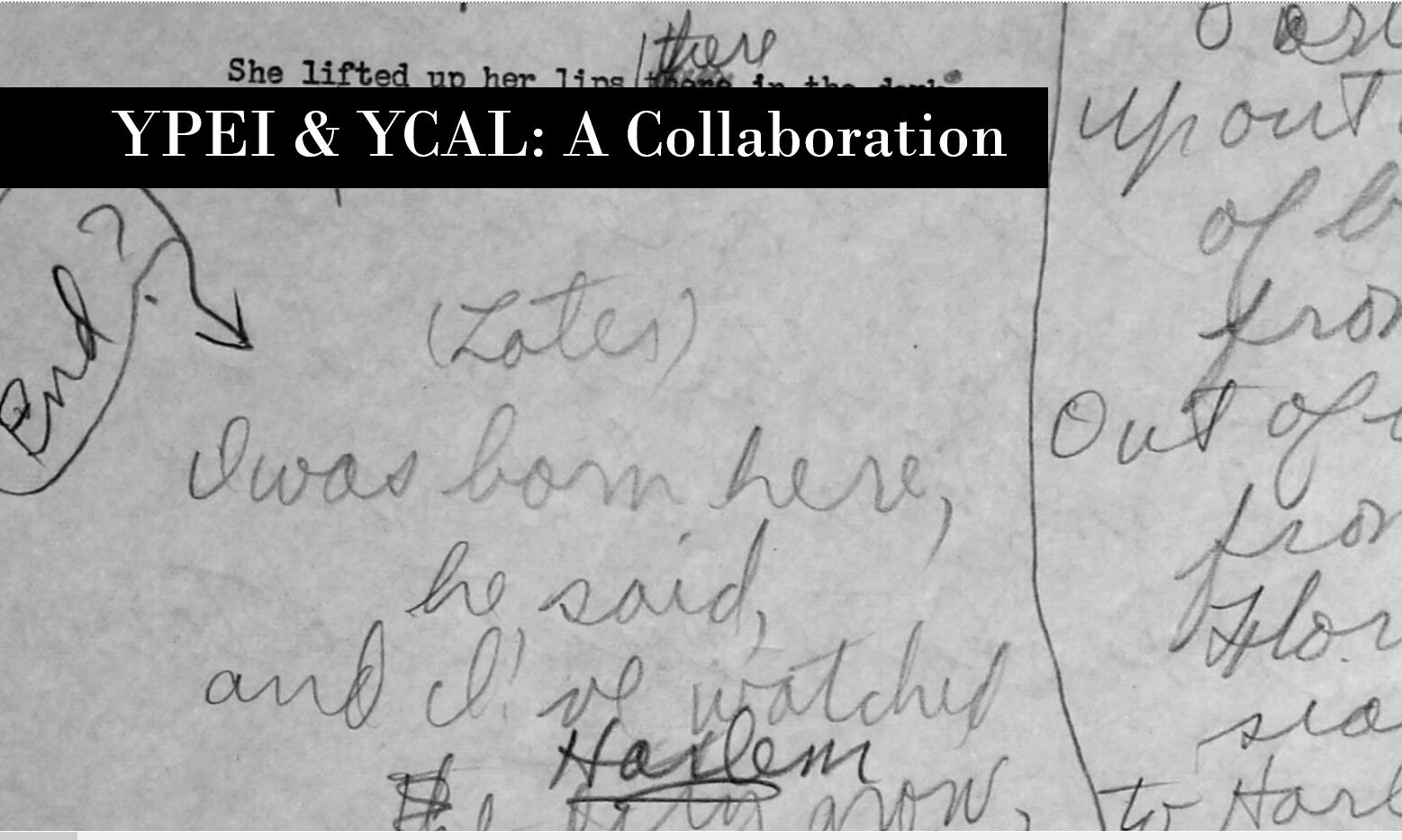 The Yale Prison Education Initiative was officially founded at Dwight Hall in 2016 by Yale alumna Zelda Roland (BA ‘08 PhD ‘16) and offered its first for-credit courses in the summer of 2018 at MacDougall-Walker Correctional Institution and Manson Youth Institution. This marked the first time any incarcerated student anywhere had ever enrolled in real Yale College credits. You can read more about YPEI’s beginnings and first offerings at this article in the YaleNews. You can read more about the history of YPEI (and the long history of Yale service in criminal justice, prison reform, and abolition) on YPEI’s Website.

This summer, YPEI introduced a new remote Creative Writing Workshop with incarcerated students at MacDougall-Walker. Conceived and led by YPEI Fellows Ananya Kumar-Banerjee (‘21), Minh Vu (YC ‘20, GSAS ‘26), and Gabrielle Colangelo (‘21, YCAL Student Research Assistant) and the Yale Literary Magazine, the Workshop was designed to provide incarcerated students with a sense of styles of writing across genres and forms through weekly course packets guest-edited by prominent writers from across the country. These packets include a robust set of readings curated by the writers, as well as writing prompts that encourage student engagement with fiction, poetry, cultural critique, and long-form narrative. The Workshop gives students the chance to work on their writing one-on-one via correspondence with a peer editor to finalize their pieces for publication, providing a space for communal learning during a time of intense isolation.

READ MORE about YPEI’s Creative Writing Workshop (including information about the Workshop’s fall iteration, “Reading Literature for Craft”) on YPEI’s website and in the Yale News.

READ YPEI’s “Voices from the Inside,” Features, a series which spotlights work by incarcerated students. Recent works include a letter from YPEI student Carl.