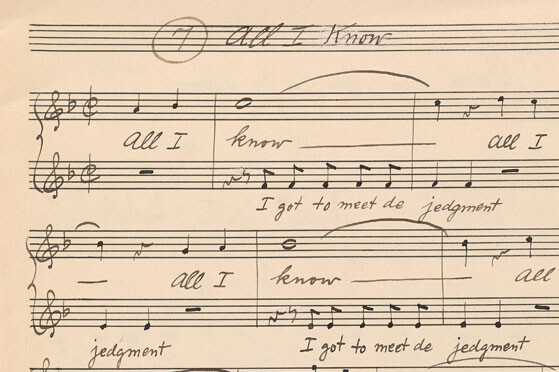 February is a short month, but one that saw no shortage of new additions to the Beinecke’s Digital Library. Users may now browse a fashion periodical featuring a beluga whale, an alchemical manuscript, and a treatise on Sufism. Manuscript music from George Gershwin’s opera Porgy and Bess asks, “Death, ain’t you got no shame?” while Landberg MSS 644 expounds on the pronunciation of diacritics. This bumper sticker documents Huey P. Newton and Bobby Seale’s simultaneous campaigns for positions in the House of Representatives and State Assembly respectively in 1968, and this flyer advertises a 1981 show featuring punk bands Flipper, Arsenal, and Crucifix. Eight issues of the New-Haven advertiser have also been digitized; this periodical enabled its subscribers to buy fire insurance, tobacco, gunpowder, or—in the case of one Milford resident—information on a stolen horse.

A newly digitized typescript letter Angela Davis sent to Ericka Huggins offers reassurance to Huggins, then incarcerated in the Marin County jail, and is also rich with Davis’ own ideological observations. She highlights the expanding role of women in the abolitionist movement and the depraved treatment of women in prisons, calling attention to the “inhuman circumstance of prison existence in general to the fascist techniques to which officials have recourse.” Hardship, isolation, and political reprisal all fail to deter Davis from her urgent conclusion: “that prisons in their present form be abolished.”

Finally, the Walter O. Evans collection of Frederick Douglass and Douglass Family papers has been digitized in its enormity. Nearly 4,000 images from 119 archival objects include meeting notes, correspondence, scrapbooks, clippings, account books, broadsides, and family photographs. These papers document Douglass’s family and professional life and are open for all visitors of the Digital Library to browse.