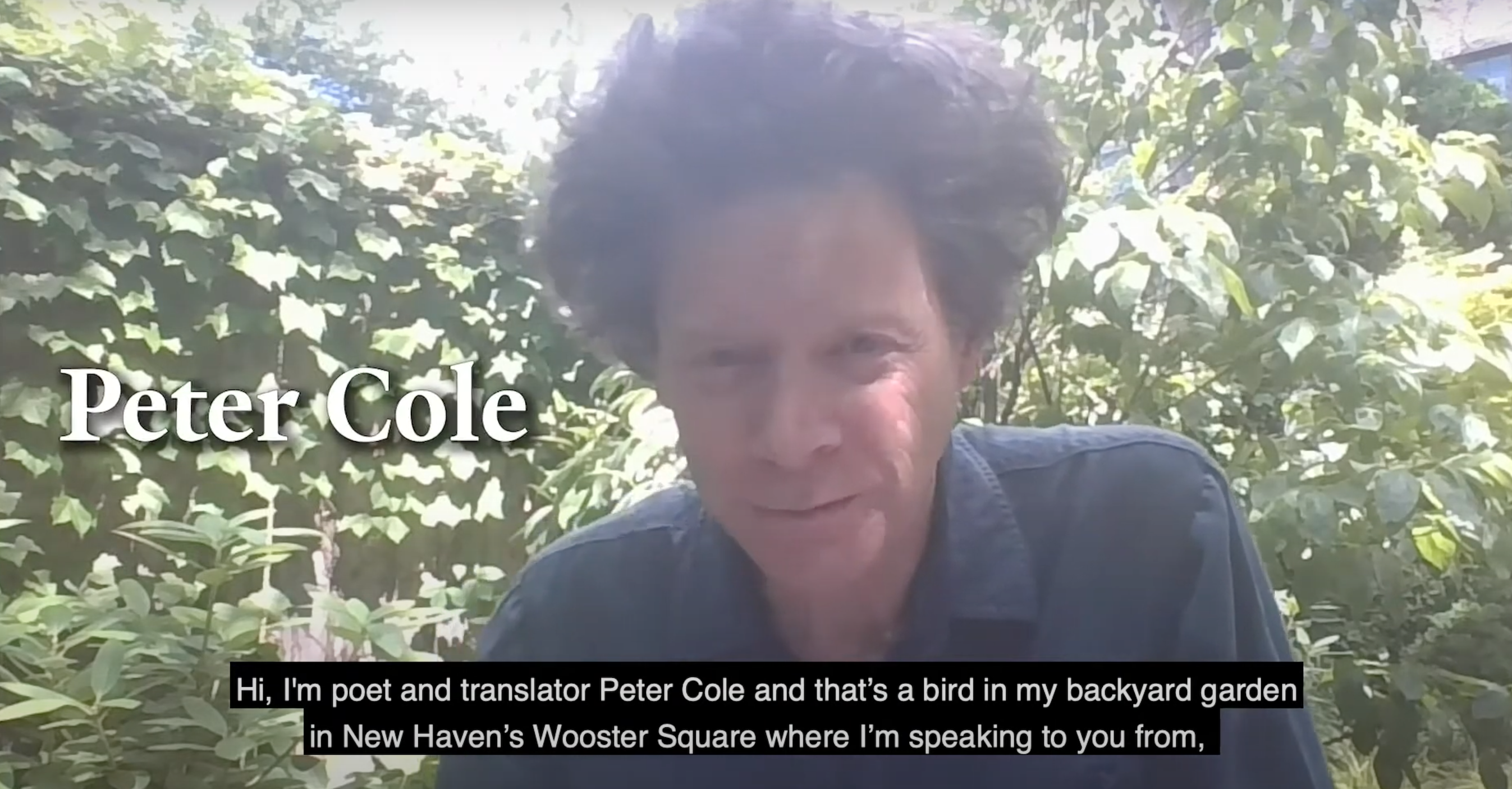 We asked poet and translator Peter Cole to reflect on creativity in 2020. He answered by speaking about about writing in times of extremity and art as response and responsibility. He discussed his own creative process and shared new work written in quarantine this spring—a section from Edensongs, a libretto to be set to music by the composer Aaron Jay Kernis.

Peter reads from “Edensongs”:  “Now we are falling / / through what’s to come  / needing Eden / now we are drifting // Eden undone…”

Born in Paterson, New Jersey, in 1957, Peter Cole is the author of five books of poems—most recently Hymns & Qualms: New and Selected Poems and Translations (FSG, 2017)—and many volumes of translation from Hebrew and Arabic, medieval and modern.  Praised for his “prosodic mastery” and “keen moral intelligence” (The American Poet), and for the “rigor, vigor, joy, and wit” of his poetry (The Paris Review), Cole has created a body of work that defies traditional distinctions between old and new, foreign and familiar, translation and original. He is, Harold Bloom writes, “a matchless translator and one of the handful of authentic poets in his own American generation.” Among his many honors are an American Academy of Arts and Letters Award in Literature, a Guggenheim Foundation Fellowship, a Jewish National Book Award, the PEN Prize in Translation, and, in 2007, a MacArthur Fellowship. He divides his time between Jerusalem and New Haven, where he teaches at Yale. (Source.)

FIND Peter Cole online at his website, where you can discover poems, translations, and interviews, such as this one from the Paris Review.

READ Peter Cole’s most recent chapbook, On Being Drawn, with drawings by Terry Winters. A meditation on receptivity and composition, the collection asks: is ekphrasis a kind of translation? Or translation a kind of ekphrasis?

READ Hymns and Qualms, Peter’s 2017 collection of poems and translations.

One of America’s most honored composers, Aaron Jay Kernis won Northwestern’s Nemmers Award (2011) and was inducted in to the Classical Music Hall of Fame.  A member of the American Academy of Arts and Letters, he received the coveted Grawemeyer Award in Music Composition (2002) for the cello and orchestra version of “Colored Field”; the 1998 Pulitzer Prize for his String Quartet No. 2 (“musica instrumentalis”). He has also been awarded the Stoeger Prize from the Chamber Music Society of Lincoln Center, a Guggenheim Fellowship, the Rome Prize, an NEA grant, a Bearns Prize, and a  New York Foundation for the Arts Award. He is the Workshop Director of the Nashville Symphony Composer Lab, and for 11 years, served as New Music Adviser to the Minnesota Orchestra, with which he co-founded and directed its Composer Institute for 15 years. He teaches composition at the Yale School of Music. (Source.)

FIND Aaron Jay Kernis online at his website, where you can listen to more of his work.

READ about Aaron’s “Venit Illuminatio (Toward the Illumination of Colored Light),” which premiered at the St. Louis Symphony in November 2019. The score and composer’s note can be found here.

Yale students, take note: every spring, Peter Cole teaches a seminar called, “The Practice of Literary Translation,” which combines a seminar on the history and theory of translation with a hands-on workshop where students produce their own work. Professor Cole’s class often visits the Beinecke library to view materials related to literary translation. Each spring, students examine materials such as:

Edensongs “has a garden at its heart.” To research the project, Peter Cole read widely: “things from climate change to Kabbalah, depth psychology and apocalypse…Islamic gardens and Renaissance gardens,” and more. Many relevant materials can be found in Beinecke Collections.