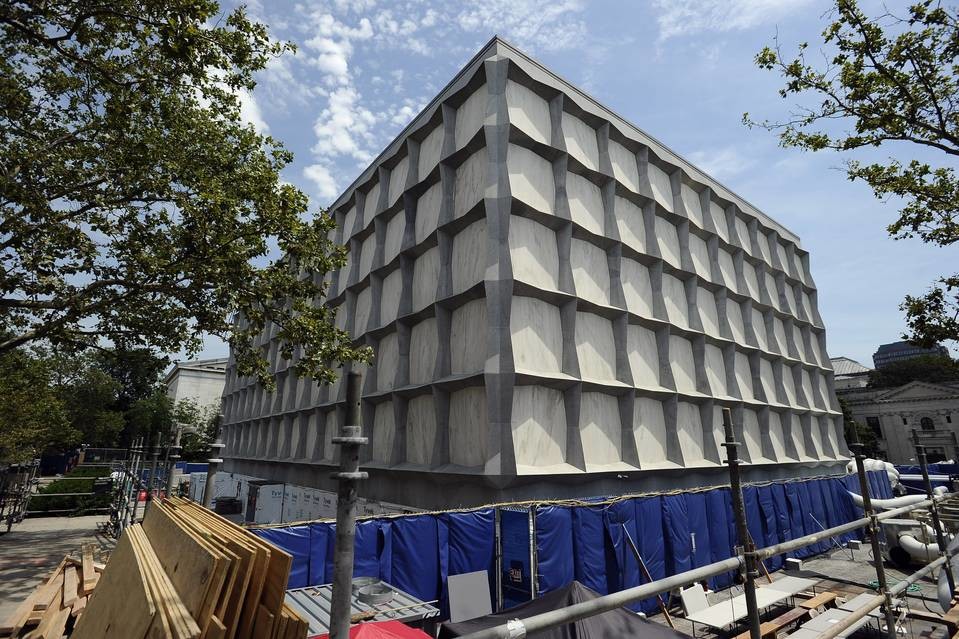 NEW HAVEN, Conn.—When Yale University’s Beinecke library opened in 1963, curators smoked at their desks and a small fire once erupted when the inaugural director flicked a lighted cigarette into his wastebasket.

Now, as part of a massive renovation under way at the Beinecke Rare Book and Manuscript Library, there’s a state-of-the-art fire suppression system, as well as an array of computerized cameras and monitors to rival a casino’s. New systems keep temperature and humidity levels steady in the Modernist building. They also are quieter than the originals, which roared “like an airplane taking off,” says Edwin C. Schroeder, who has led the Beinecke since January 2011.

For more than a year, Yale has presided over a roughly $73 million renovation of the library, which will re-open in September. The Beinecke is one of the world’s largest treasure houses of rare books and manuscripts. Its expansive collection and deep resources are as celebrated as its building, where sunlight diffused through marble panels casts an amber glow on the six-story glass-enclosed book tower. 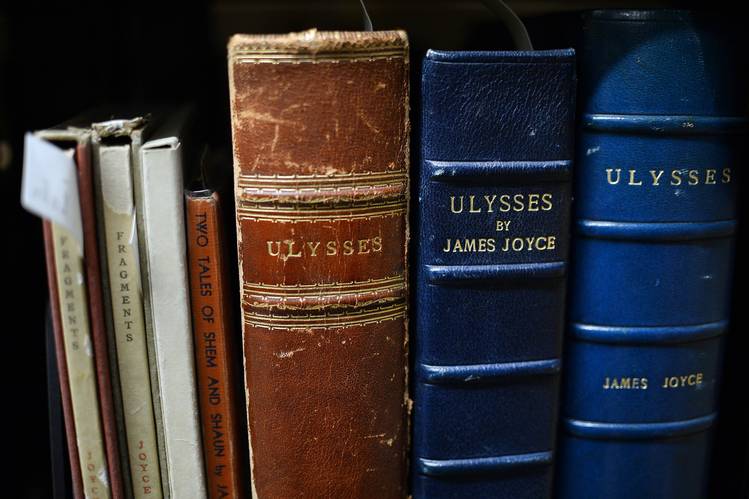 A selection of rare James Joyce books are found inside the renovated portion of the Beinecke Library’s Stack Tower Photo: Jessica Hill for The Wall Street Journal
In addition to ushering the electric, plumbing, fire-suppression, security and climate-control systems out of the “Mad Men” era, the renovation project has given the exterior’s rectangular grid of Vermont marble and granite a discreet facelift. The translucent marble panels have been cleaned and feather cracks sealed. Gordon Bunshaft, the architect of the Hirschhorn Museum and Sculpture Garden in Washington, designed the building.

The Beinecke’s book tower, which can hold about 200,000 volumes, was emptied out for the construction and has been refilled. The collection, which includes the papers of Langston Hughes, Ezra Pound and “Lassie” creator Eric Knight, is divided between the tower and underground stacks at the library itself and a facility a few miles away.

The sprucing up of public areas such as the exhibition hall has been so subtle, Mr. Schroeder frets that visitors will wonder, “What have you guys been doing for the past 15 months?”

Come September, the Gutenberg Bible—one of fewer than 50 copies in existence—and the huge folio of John James Audubon’s “The Birds of America” will be back in their Bunshaft-designed display cases. The original Florence Knoll furniture, in a mid-century Modern style evocative of “The Bob Newhart Show,” has been restored. The glass-walled reading room at the edge of Isamu Noguchi’s sculpture garden will look the same but with power outlets in tables rather than on the ground. Before, Mr. Schroeder said, “you’d see senior scholars crawling around the floor to plug in” their computers.

Other rare-book repositories, including Oxford’s Weston Library, have added Bunshaft hallmarks such as airy open spaces and glass walls in recent renovations. However, Bunshaft’s design, which buried the heating and air-conditioning systems in a sub-basement more than 30 feet underground, also handicapped the renovation. The machinery had to be dismantled like Lego pieces before being hauled into or out of the building on a dumbwaiter, through a hatch about 7 feet by 8 feet. 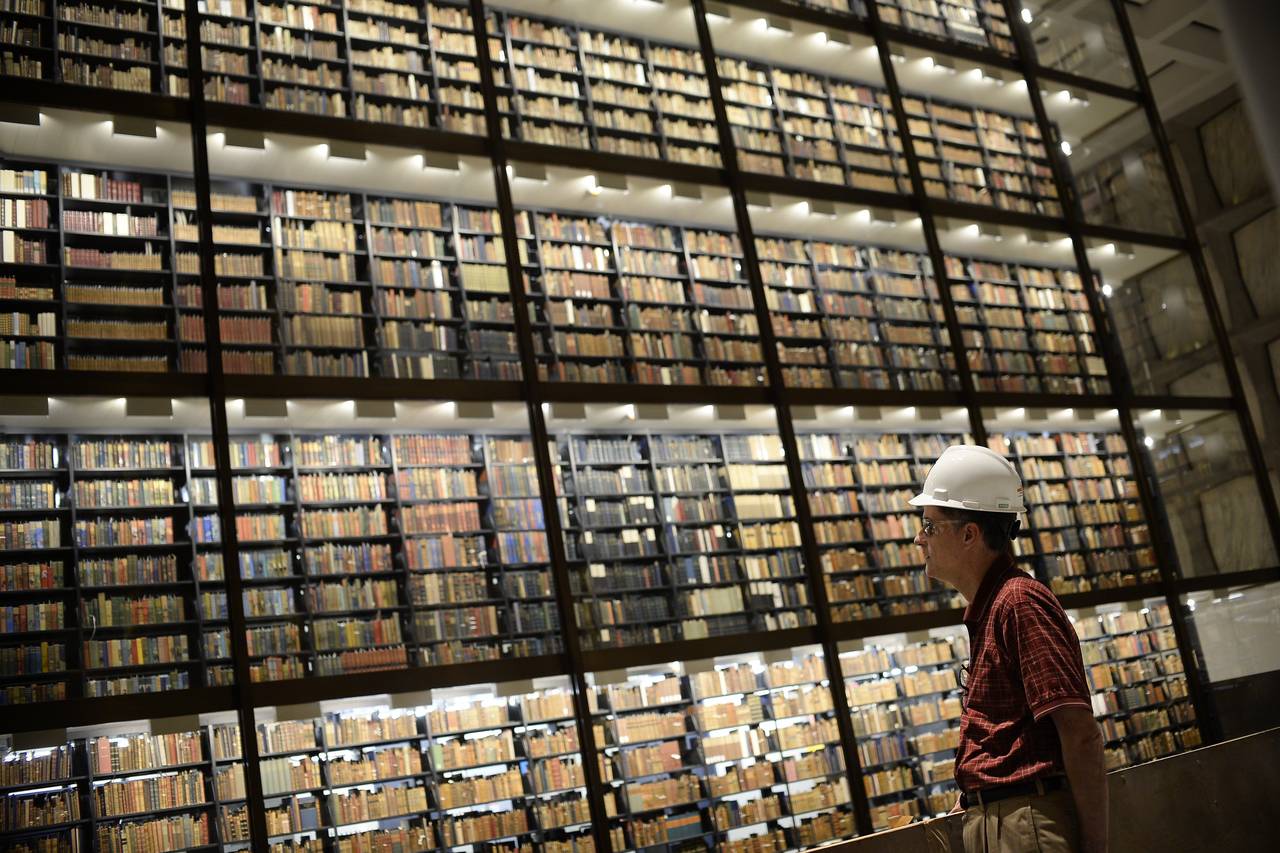 Mr. Schroeder in the Stack Tower in the library at Yale Photo: Jessica Hill for The Wall Street Journal

With the renovation, Bunshaft’s cathedral of rare books is becoming less rarified. In the past year, the Beinecke has been outfitted with more classrooms, including one with a printing press. The new spaces will allow students to work directly with sprawling holdings that range from a papyrus collection to texts and drawings printed on Chipotle Mexican Grill paper cups and bags

When the building—a gift from the bibliophiles Edwin and Frederick Beinecke and their brother Walter—opened 53 years ago, “it was aimed at senior scholars, faculty, book collectors and librarians,” Mr. Schroeder said. “The idea that undergraduates or even graduate students would be using the library was not on anyone’s radar screen.”

That has changed, at Yale and in rare-book libraries world-wide. “Two of the big trends in humanities education now are original undergraduate research…and teaching in classrooms with the original textual artifacts,” said Michael F. Suarez, a Jesuit priest and an English professor at the University of Virginia and the director of Rare Book School, an institute devoted to the study of the history of books and printing. For example, Professor Suarez said, his students can find an image of Thomas Paine’s “Common Sense” on the Internet and then examine dozens of 18th-century versions of the pamphlet in the University’s Albert and Shirley Small Special Collections Library.

“In the 1950s and ’60s, the university rare-book room was a pretty forbidding place and the person who was admitted there was a credentialed scholar with a tweed coat,” said Stephen Enniss, director of the Harry Ransom Center at the University of Texas at Austin. The push toward teaching with original materials, Mr. Enniss said, may be driven by a “tremendous craving for authenticity” in an era when “our experience of the world is often mediated by a digital device.” 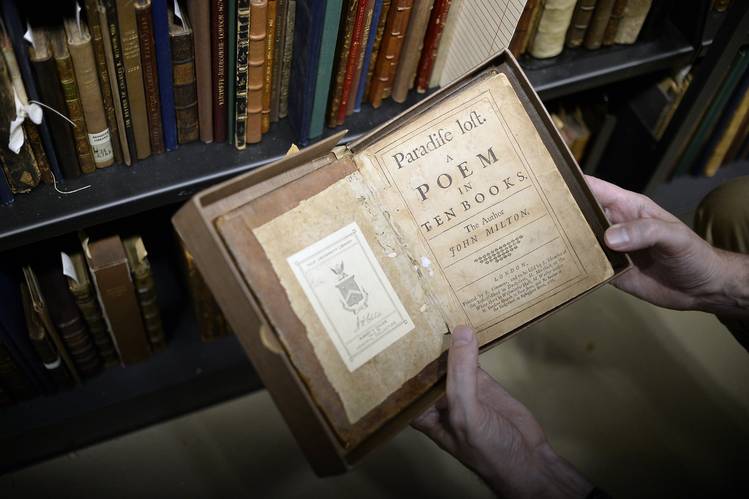 Every year, the library takes in between 10,000 and 15,000 books, 1,000 linear feet of archives and 2,000 to 3,000 manuscript and nonbook items, such as medieval works, diaries, letters and photographs. Recent additions include the papers of playwrights Donald Margulies and Paula Vogel, as well as the 15th-century Haslinger Breviary. The breviary, a devotional used by an Austrian priest—and angling enthusiast—contains what is considered the world’s oldest existing tract on fly-fishing. Among the volume’s Latin and German entries about saints and prayers is a fly-tying tutorial that runs for several pages.

Mr. Schroeder says that rather than pursuing a black tulip—bibliophiles’ term for a rare treasure—his goal is to keep the Beinecke’s collection balanced across times and genres, so it supports current research and stays ahead of trends in scholarship. The library doesn’t disclose its acquisition budget.

Beinecke staff members at the Technical Services Department, a mile north of the library, consign many new arrivals to three days in an on-site freezer at 30 degrees below zero Celsius to kill any bugs and to stabilize mold. The library’s stacks remain, with some seasonal adjustments, around 65 degrees Fahrenheit and 45% humidity—ideal conditions for delicate paper and bindings, if a bit chilly for both literal and figurative bookworms. “A spider can wander on in” to the building, Mr. Schroeder said, “but it’s not hospitable to insects.”

Write to Brenda Cronin at brenda.cronin@wsj.com