A Country without Storytellers? Women, Film, and Resistance in Afghanistan with Sahraa Karimi 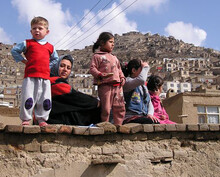 ZOOM webinar registration: https://bit.ly/3fWRBuE
Sahraa Karimi is an Afghan filmmaker and former director of Afghan Film. Can you imagine a country without visual storytellers? Can you imagine films without actresses? Can you imagine a nation without cinema? In Afghanistan, where you can find unique stories in every corner of the daily lives of millions of people, with the return of the Taliban to power, storytelling in any format—and film in particular—has been forbidden. While many 21st-century filmmakers dream of making films in Marc, in Afghanistan they cannot even shoot a single frame. Karimi will tell us how Afghan filmmakers fight against these limitations; how they use cinematic platforms to tell the world untold stories of people in Afghanistan; and how—with the support of the world—they do not let the Taliban stop them from telling their stories.
Sponsored by Beinecke Library, the Postwar Culture Working Group, and the Whitney Humanities Center. For more information about the ART & PROTEST SERIES or to join the mailing list, write to kevin.repp@yale.edu.