These are Still Situationist Times with Jacqueline de Jong 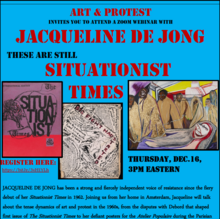 Zoom webinar registration: https://bit.ly/3xH1YLh
JACQUELINE DE JONG has been a strong and fiercely independent voice of resistance since the fiery debut of her Situationist Times in 1962. Joining us from her home in Amsterdam, Jacqueline will talk about the tense dynamics of art and protest in the 1960s, from the disputes with Debord that shaped first issue of The Situationist Times to her defiant posters for the Atelier Populaire during the Parisian uprisings of May 1968. From there she will turn to her latest work, including the long-delayed seventh number of the Situationist Times and her latest paintings, inspired by the immigration crisis in Europe, currently on display in the solo exhibition Border-Line at Ortuzar Projects in New York. We hope you will join us for this rare opportunity to reflect on the changing role of art in cultures of protest across two distinct historical eras.
Sponsored by Beinecke Library, the Postwar Culture Working Group, and the Whitney Humanities Center. For more information about the ART & PROTEST SERIES or to join the mailing list, write to kevin.repp@yale.edu.