Whither art activism? History and prospects with Kim Charnley and Gregory Sholette 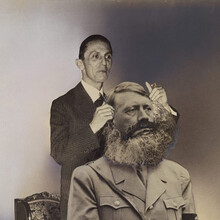 Zoom webinar registration: https://bit.ly/3BVG4WE
What does the strange arc of art activism tell us about the prospects of progressive politics today? From the 1990s, when activism existed on the fringes of an expanding art world dominated by spectacular forms of ironic neo-pop; through the resurgence of radical imaginative resistance around the turn of the century, across wave after wave of new movements, insurgent politics, and “tactical media” in the crisis-ridden 2010s, art activism has brought us to the bizarre juncture of the present. It is a moment when the far Right is weaponizing social media using tactics straight out of the progressive playbook, when art collectives have gone mainstream, Ukrainian artists are welding minimalist looking anti-tank barricades, and the left liberal politics of art institutions—once the target of radical critique—are now under full-scale attack across the globe. Noted writers and critics Kim Charnley and Gregory Sholette will reflect on this perplexing situation and what the history and practice of art activism might tell us about the role of emancipatory art within it.
Sponsored by Beinecke Library, the Postwar Culture Working Group, and the Whitney Humanities Center. For more information about the ART & PROTEST SERIES or to join the mailing list, write to kevin.repp@yale.edu.
(Image: detail of John Heartfield photomontage for Arbeiter Illustrierte Zeitung 16, “MIMIKRY” cover, April 1934)