We Hold These Truths …

A special outdoor display of images of some essential documents of United States history from the collections: the first printings of the Declaration of Independence, Frederick Douglass’s 1852 Oration on the Fourth of July, and the 1848 Declaration of Sentiments from the Woman’s Rights Convention at Seneca Falls.

Beginning in summer 2021, the library has shared these essential documents of the nation through reproductions on the exterior windows of 121 Wall Street and through reprising video of readings in 2020 by members of the New Haven and Yale communities of the three texts. These documents will be on public view again in the exhibition hall around the Independence Day holiday, hopefully in summer 2022, as they had been in 2019 and prior years/ 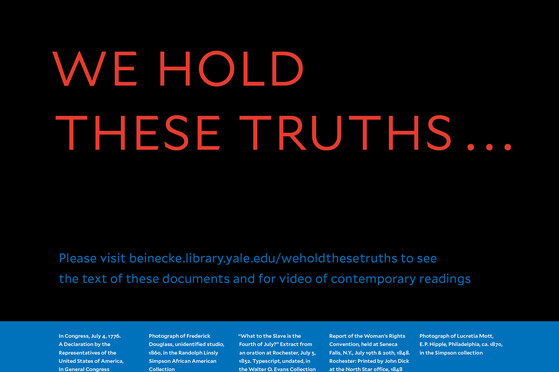 “What to the Slave is the Fourth of July?” extract from an oration at Rochester, July 5, 1852. Typescript, undated, in the Walter O. Evans Collection of Frederick Douglass and Douglass Family Papers (Beinecke JWJ MSS 240)

The Report of the Woman’s Rights Convention, Held at Seneca Falls, N.Y., July 19th and 20th, 1848. Rochester: Printed by John Dick at the North Star Office (i.e., Frederick Douglass’ newspaper office). It includes the “Declaration of Sentiments,” with opening words that declare, “We hold these truths to be self-evident; that all men and women are created equal … “ (Beinecke 2013 13)

END_OF_DOCUMENT_TOKEN_TO_BE_REPLACED

To read the full text of the 1848 Report of the Woman’s Rights Convention. please see the website of the Women’s Rights National Historical Park
The library windows also feature reproductions of carte-de-visite images of Douglass from 1860, and of Lucretia Mott, abolitionist, women’s rights activist, and an organizer of the 1848 convention, from 1870.

Other markers of the nation’s founding nearby

American history is alive and accessible throughout New Haven. Visitors are also encouraged to see other markers of U.S. history related to the Declaration of Independence located near the Beinecke Library.
Immediately north of the library, the Grove Street Cemetery, 227 Grove Street at High Street, is the burial site of Roger Sherman, a signatory of the Declaration and one of the Committee of Five – led by Thomas Jefferson and including John Adams, Benjamin Franklin, and Robert Livingston – charged by the Second Continental Congress with drafting and presenting the Declaration of Independence. The first chartered burial ground in the U.S., the cemetery is free and open to the public daily 9 am – 4 pm.
On July 4, the General David Humphreys Branch of the Connecticut Society of the Sons of the American Revolution, will honor all 56 signers of the U.S. Declaration of Independence and local veterans of the Revolutionary War, at their annual Independence Day ceremony at 9 am. All are welcome to attend.
A few blocks south of the Beinecke Library, the Yale University Art Gallery, 1111 Chapel Street, holds numerous works of art related to the founding of the nation. The works on view to the public include John Trumbull’s “The Declaration of Independence, July 4, 1776,” a depiction of the Committee of Five presenting the document to John Hancock.  Visit the gallery’s website for information about visiting and for links to their digital collections.