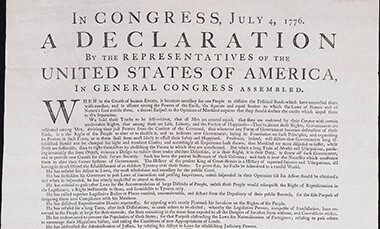 The Beinecke Library marks the 243rd anniversary of the nation’s founding with a special display of a major document of United States history from its collections.
All are welcome to visit and see one of the 26 known copies of the historic first printing of the Declaration of Independence. Often referred to as the Dunlap Broadside in honor of John Dunlap who printed approximately 200 copies in Philadelphia on July 4, 1776, the broadside was soon distributed throughout the thirteen states to announce the establishment of the new nation.
The Dunlap Broadside will be on view in a temporary exhibition case on the library’s mezzanine from Thursday, June 27, through Thursday, July 11. The Beinecke Library’s ground floor and mezzanine exhibition spaces are open to the public with no admission charge. Located at 121 Wall Street, the library’s exhibition hall is free and open to the public Monday, 10 am – 7 pm; Tuesday – Thursday, 9 am – 7 pm; Friday, 9 am – 5 pm; Saturday, 12 – 5 pm; and, Sunday, 12 – 4 pm. Please note: the library is closed on Thursday, July 4, in observance of Independence Day.
In addition to the first printing of the Declaration of Independence, the library will also have on display some other essential documents of U.S. history:

All are welcome to attend a special public reading of the Declaration of Independence and Douglass’ oration on Friday, July 5, at 4 pm, on the library mezzanine.

Visitors can also enjoy the building-wide summertime exhibitions, Life of the Party: Jerome Zerbe and The Social Photograph & Michael Childers: Author! Author!, as well as materials on permanent view at the Beinecke Library, including: the Gutenberg Bible, the first Western book printed from movable type, and John James Audubon’s Birds of America, on the mezzanine, and, on the ground floor, the 1742 Library of Yale College, the first books in the original Yale library, as well as a collection of incunabula, the earliest printed books in the West, from 1455 to ca. 1500.

Other markers of the nation’s founding nearby

American history is alive and accessible throughout New Haven. Visitors are also encouraged to see other markers of U.S. history related to the Declaration of Independence located near the Beinecke Library.
Immediately north of the library, the Grove Street Cemetery, 227 Grove Street at High Street, is the burial site of Roger Sherman, a signatory of the Declaration and one of the Committee of Five – led by Thomas Jefferson and including John Adams, Benjamin Franklin, and Robert Livingston – charged by the Second Continental Congress with drafting and presenting the Declaration of Independence. The first chartered burial ground in the U.S., the cemetery is free and open to the public daily 9 am – 4 pm. The cemetery is also the final resting place of Grimes, who died in New Haven in 1865, and other notable persons in the history of the nation.
On July 4, the General David Humphreys Branch of the Connecticut Society of the Sons of the American Revolution, will honor all 56 signers of the U.S. Declaration of Independence and local veterans of the Revolutionary War, at their 68th annual Independence Day ceremony at 9 am. All are welcome to attend.
A few blocks south of the Beinecke Library, the Yale University Art Gallery, 1111 Chapel Street, holds numerous works of art related to the founding of the nation. The works on view to the public include John Trumbull’s “The Declaration of Independence, July 4, 1776,” a depiction of the Committee of Five presenting the document to John Hancock.  The Gallery is free and open to the public Tuesday – Friday, 10 am – 5 pm; Saturday – Sunday, 11 am – 5 pm. The gallery is closed Mondays and on July 4. 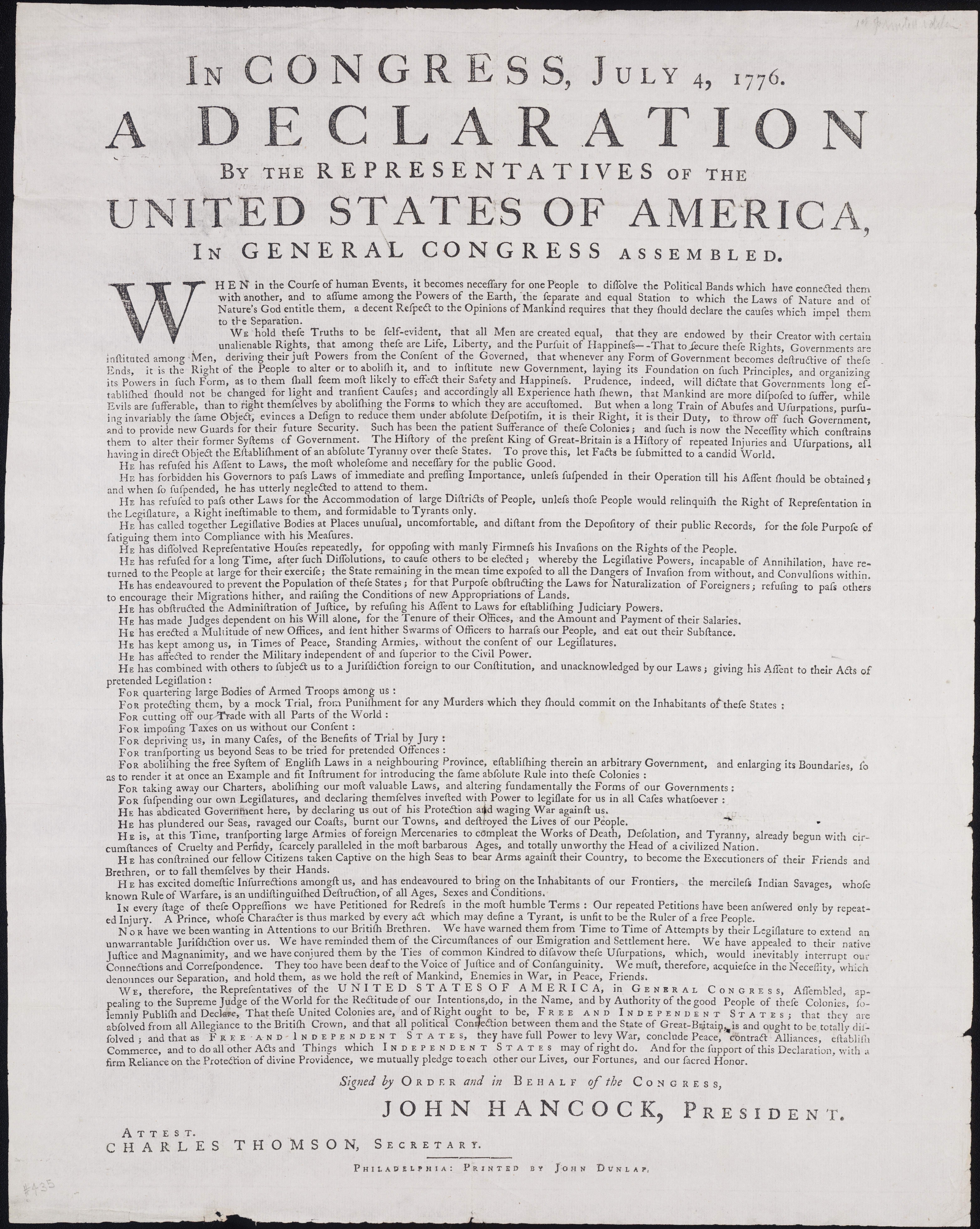