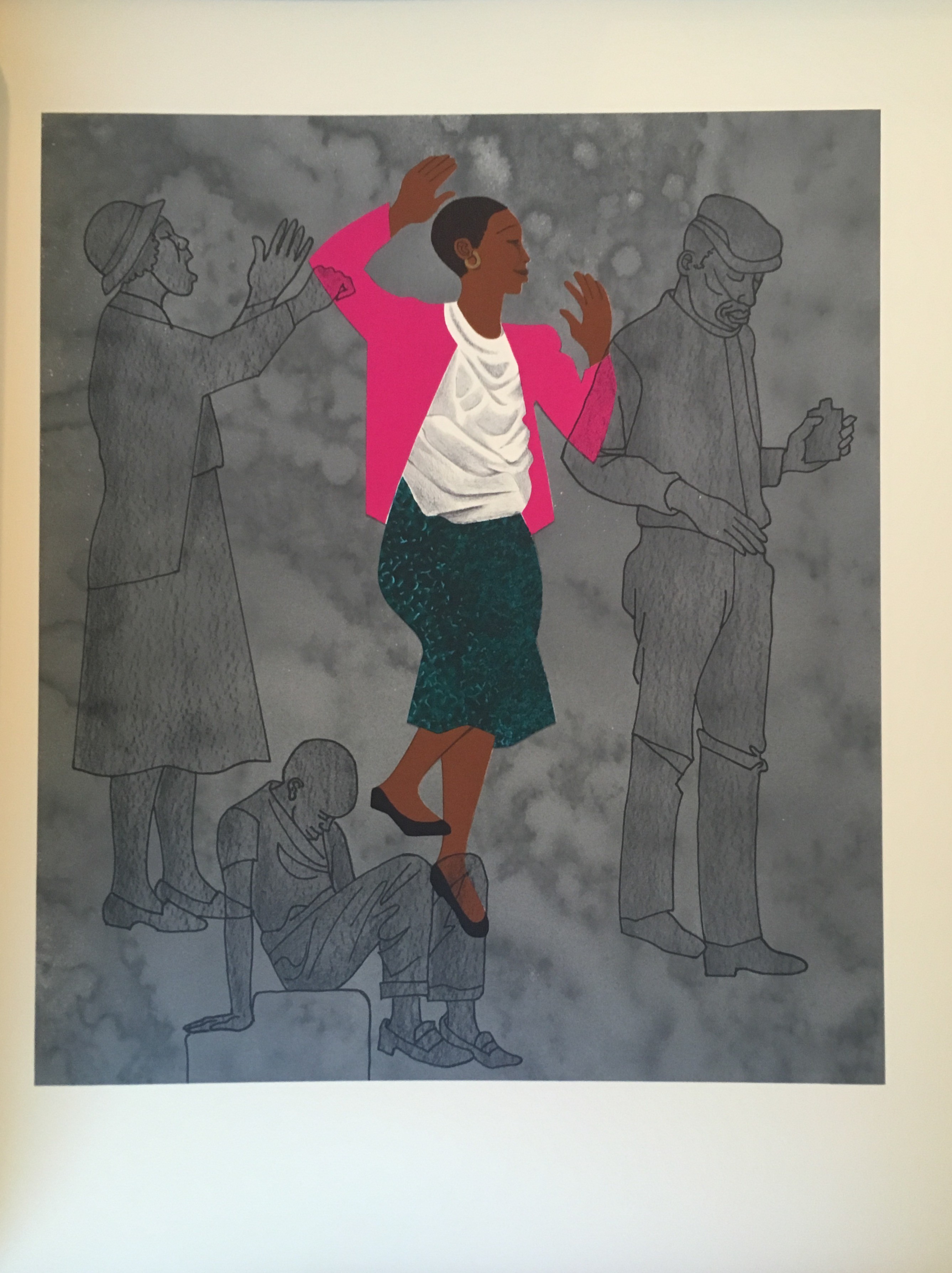 Margaret Walker (1915-1988) was an educator, writer, and scholar. She received many awards including the Yale Series of Younger Poets Award (Muriel Rukeyser also received this honor), a Fulbright Fellowship, and a Senior Fellowship from the National Endowment for the Humanities. Walker wrote books of poetry as well as a novel, Jubilee, based on her great grandmother’s life. Walker founded the Institute for the Study of Black History, Life and Culture of Black People located at Jackson State College in Mississippi.

Researchers will find in the Beinecke collections Walker’s intimate correspondences with writer Richard Wright, photographs of Walker in New Haven, many signed poetry books and publications, and a stunning folio with Walker’s poetry and Elizabeth Catlett’s lithographs. Walker’s work uses sound and song to explore the America around her, digging through oral, social, and personal histories to create poems rich and rhythmic.

For My People by Margaret Walker, published in the Yale Series of Younger Poets

with a foreword by Stephen Vincent Benét, 1942

“Straightforwardness, directness, reality are good things to find in a young poet. It is rarer to find them combined with a controlled intensity of emotion and a language that, at times, even when it is most modern, has something of the surge of biblical poetry…There is a deep sincerity in all these poems—a sincerity at times disquieting. For this is what one American has found and seen—this is the song of her people, of her part of America.” - Benét on Walker

“There were bizarre beginnings in old lands for the making of me. There were sugar sands and islands of fern and pearl, palm jungles and stretches of a never-ending sea.” - “For My People”

Revisions and manuscripts: For My People, Ballad for Nat Turner, and more

First and revised drafts of poems with Walker’s manuscript notes and revisions:

Walker’s novel, Jubilee, is based on the life of Walker’s great-grandmother. The novel tells the story of a Georgia plantation pre-Civil War through its collapse.

Chapter titles include: “Death is a mystery that only the squinch owl knows,” “Brother Zeke: ‘I am a poor way-faring stranger,” “John Brown’s body lies a-mouldering in the grave,” and “Don’t look like free schools and land reform is ever coming”

The Ballad of the Free by Margaret Walker, 1966

Printed in a Broadside Series by Broadside Press, this collection includes poems by Dudley Randall, Langston Hughes, Gwendolyn Brooks, and others. All of the works are printed differently, with varying typography, designs, and images.

“Bold Nat Turner by the blood of God / Rose up preaching on Virginia’s sod; / Smote the land with his passionate plea / Time’s done come to set my people free.” - “The Ballad of the Free” by Walker

Prophets for a new day by Margaret Walker, 1970

“‘Hurry up Lucille or we won’t get arrested with our group.’ (An eight year old demonstrator, 1963)” - Epigraph to “Street Demonstration”

“This book is dedicated to the memory of my father, the Reverend Sigismund C. Walker, and to my late friend and mentor, Langston Hughes”

“I want to tell you what hills are like in October / when colors gush down mountainsides / and little streams are freighted with a caravan of leaves….” - “October Journey”

“For Gwen–1969 (Gwendolyn Brooks)”: “The slender, shy, and sensitive young girl / is woman now, / her words a power in the Ebon land. / Outside her window on the street / a mass of life moves by….Dreamer and seer of tales / She witnessed rebellion, / struggle and sweat. / The people are her heartbeat— / In their footsteps pulsate daily / all her black words of fire and blood.”

Richard Wright: Daemonic Genius / A Portrait of the Man / A Critical Look at his Work by Margaret Walker, 1988

Wright’s widow sued to prevent the publication of this biography, charging invasion of privacy. The book was eventually published, with some revisions, in 1988. The biography recounts the personal and professional life of Wright and details Wright’s and Walker’s friendship and falling out.

This is My Century / New and Collected Poems by Margaret Walker, 1989

With a handwritten inscription: “Best wishes to Donald Gallop”

“I want to write the songs of my people. / I want to hear them sing melodies in the dark. / I want to catch the last floating strains from their sob-torn throats. / I want to frame their dreams into words; their souls into notes.” - “I Want to Write”

For My People by Margaret Walker with lithographs by Elizabeth Catlett

published as part of The Limited Editions Club, December 1992

A huge folio with five four-color lithographs by Catlett, Walker’s former roommate at the State University of Iowa. The book is encased in imported red Japanese linen over heavy boards and enclosed in a box covered in black cotton.

A note about the Club says that Walker’s first teacher of poetics, her father, “[enjoined] her to include three elements in every poem: pictures (images), music (rhythm), and meaning.”

Includes poems by Walker and Brooks

A Poetic Equation: Conversations Between Nikki Giovanni and Margaret Walker, 1974

One-hundred thirty-five pages of conversation between Giovanni and Walker. The writers discuss African American identity, whiteness, Vietnam, the place of the woman in society, violence, literature, and more.

As Walker discusses sitting with Richard Wright in Frank Marshall Davis’ house in the late thirties: “I was unaware of the tremendous vitality of black language. I knew about black music and I always wondered whether black music was influencing me and my writing at all because I’d come to be steeped in it. I think I was extremely conscious of what I loved most, which were the spirituals….”

This collection contains hundreds of letters from Walker to Wright. The letters dwell on books, authors, literary friends, literary circles, race, police brutality in Chicago, the relationship between Jews and African Americans in Chicago, “gossip,” family, gender, and writing and writer’s block. Rumor has it that Walker was in love with Wright for a time, and these letters trace their intimate friendship and end with their falling out.

“I got the poetry back from the Yale Press with the usual rejection form suggesting that I rework the stuff and re-enter it next year.”

Discussing her short stories: “I have not tried to tell a coherent or connected story because I do not feel that conversational speech goes that way especially among our people and more than anything I have been trying to reproduce these things just as I have heard them. I have not coined words nor incidents and I hope I have done nothing to spoil the naturalness and simplicity with which these things should be done….Do you think invention would be safe here? I have lots of ideas milling around in my mind now which I think would find an excellent medium in this form but when I think of venturing away from any set plot or authentic legend or conversation I get frightened.”

“My mother’s changing life now and she’s writing me the craziest letters imaginable, wild schemes for this and that; my kid brother is fifteen and as restless as a cat; my father has discovered that he’s past fifty and of course being scared of senescence he’s trying to sow a double bushel of wild oats to make up for what he claims was a very ascetic youth; and now they want to tell me that I’m in bad shape myself! My grandmother is about the only sane one left….Conditions in Chicago are terrible. 80 Negro families were put in the street last week and they claim the only people who can rent houses are P.O. and Pullman employees. I don’t believe that. A child stepped up to Mercedes right here in this neighborhood and begged for something to eat and winter coming on, God its awful!”

“in the Cafeteria near the Project…the woman proceeded to tell me I could not eat there. Well I was more than stunned than anything else as I had eaten there any number of times before…[we] threw [our] trays and service down with a clatter and out we went. Well about a couple weeks ago Alva had the same experience….As a result a suit is in progress.”

“I thought coloured people were sensitive enough but I think jews have it all over us.”

“the whole cry of the southside is that the Negro is being exploited worse by the Jew and that maybe Hitler is right. On the other side the Jew with his everlasting persecution complex says nobody treats him right.”

“In short you gave me my first sense of freedom and worth as an individual. Twenty-five years from now when I probably won’t know what corner of the globe you are in I’ll remember these things….Intellectually you’re the best I ever met.

“Monday night I realized I have gone out of your life.”

Walker’s introduction to C. Eric Lincoln’s book of poetry, This Road Since Freedom, 1990

“The Black Experience offers a many-faceted perspective on American life. No two people see the same events and circumstances in the same way. What is valuable always is to know another individual’s prism and to be able to see reality through his eyes.”

“I see so much of my own personal history and the history which shaped me, the South and the U.S. in these photographs. The trials and tribulations of the Civil Right Movement, and its many victories, are reflected in much of my poetry….These photographs of Ernest Withers put before us the same kinds of images I wanted to capture in my poetry—images of men and women fighting together as leaders and activists in local and national struggle….The photographs of Ernest Withers remind us that the movement for social justice and social transformation is not over.”

Photograph of Margaret Walker, with her signature on the front, taken by William R. Ferris at Yale University, April, 1978

Margaret Walker brings us to our next female American poet, Maya Angelou, by means of a book entitled Soul Looks Back in Wonder and edited by Tom Feelings. Feelings, an American cartoonist and illustrator, recruited several poets to write selections for his book, including his friend, Angelou, and his mentor, Walker.

“EARTH-MOTHER, / Mother of all our brown-ness, / Hands clasped with arms / stretching round the world / Cuddle me closer, warm upon your breast / Slumberous, sweetly, darkness at rest. / Wake me to living and loving; / Scatter my dreams into the ethereal air. / Mother of brown-ness surround me / Deep in your sweet loving care.” - “Mother of Brown-Ness” by Walker

“I love the book and the look of words / the weight of ideas that popped into my mind / I love the tracks / of new thinking in my mind.” - “I Love the Look of Words” by Angelou