I. The Waste Land and the Dial Prize Dispute 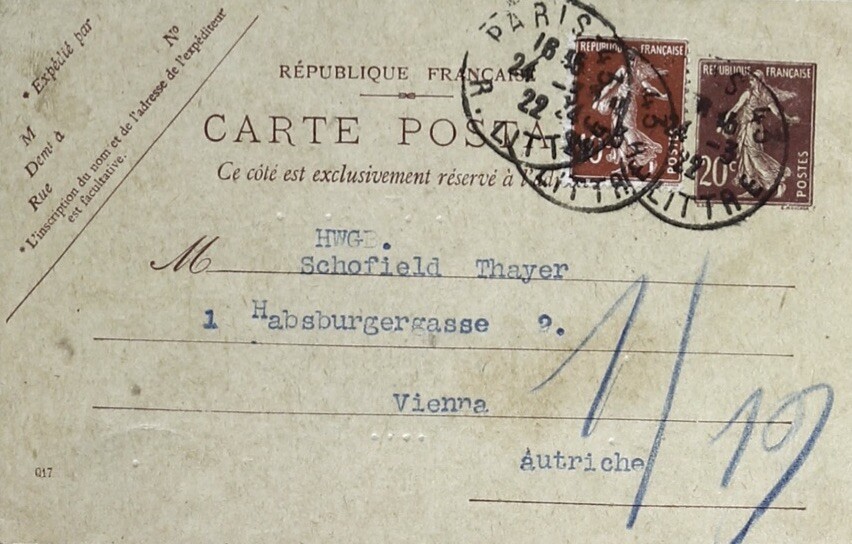 “I shall shortly have ready a poem of about 450 lines, in 4 parts, and should like to know whether the Dial wishes to print it,”

wrote T.S. Eliot to Scofield Thayer (the editor of The Dial) on January 20, 1922. Three months later, on April 30, Thayer wrote to Ezra Pound that he would not “waste further time answering letters such as that from Eliot in which he quite definitely implies than in my previous letter I had lied to him.”

What precipitated this dispute between three major figures in literary modernism: T.S. Eliot, Scofield Thayer, and Ezra Pound? The Beinecke’s Dial/Scofield Thayer Papers offer a unique account of the financial disputes that almost prevented The Waste Land from being published in The Dial. Through correspondence between Eliot, Thayer, Pound, James Sibley Watson (The Dial president), and Gilbert Seldes (The Dial editor, writer and critic), a story can be traced about the dispute through the central players’ own voices.

The story begins when Eliot first contacted Thayer about the possibility of The Dial publishing The Waste Land:

January 20, 1922. Eliot writes to Thayer about “a poem of about 450 lines, in 4 parts,” which has gone through Pound’s editing “sieve” three times. Eliot would like to publish this poem in The Dial, and wants to know how much he would be paid. 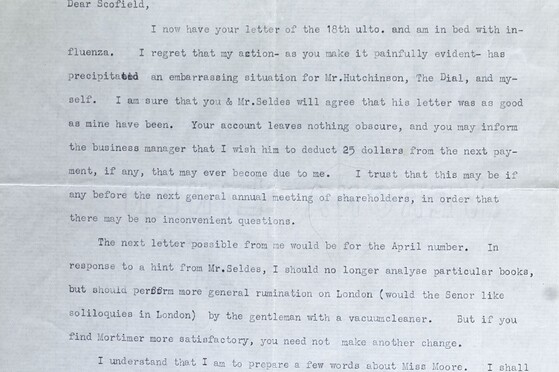 January 29, 1922. Thayer is interested, and reminds Eliot that The Dial’s rates are fixed. Thayer offers 150 dollars, and requests that Eliot sends the poem.

February 18, 1922. Pound writes to Thayer, “Eliot’s poem is very important, almost enough to make everyone else shut up shop,” and states that he does not think the poem ought to be divided across issues.

March 9-10, 1922. Pound writes to Thayer again, lamenting Eliot’s fragile health. Pound wishes that Eliot “had had the December award,” and praises The Waste Land, writing that the poem “is as good in its way as Ulysses in its way,” especially amid a lack of “work that one can take hold of and say ‘this at any rate stands, and makes a definite part of literature.’”

March 12, 1922. Thayer writes to Eliot that The Dial does not have sufficient funds to pay special rates. If Eliot sends the poem as an explanation of why he should be paid more, then Thayer will reconsider; otherwise, he will assume that The Dial will not publish the poem.

March 19, 1922. Thayer replies to Pound, and shares Pound’s concern for Eliot’s health: “I am sorry about Eliot and in particular that he has fallen upon the uncharted morass of endocrines. Ulysses, fat as a medical treatise, has arrived.”

March 24, 1922. Pound writes to Thayer, suggesting that Eliot’s poor health has to do with George Moore and Sherwood Anderson “boasting of preferential rates” from The Dial. Pound’s “[p]ersonal preference … is for concerted [action] in face of indubitable enemy.” 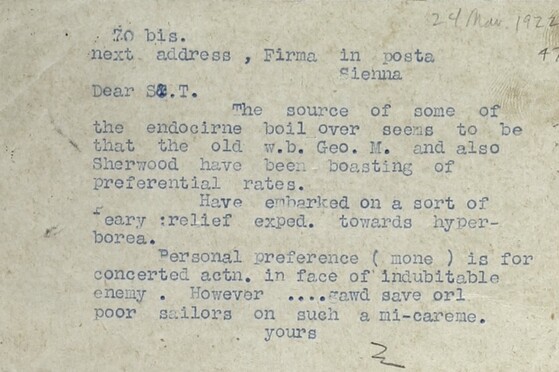 April 17, 1922. Thayer writes to Pound to determine his stance on the dispute. Thayer has heard from Eliot that Pound “concurs” with Eliot’s “refus[al] to dispose of the poem to The Dial.”

April 23, 1922. Pound offers Thayer a lengthy explanation of his stance on the issue. Pound recounts his efforts to encourage Eliot to send the poem to The Dial, and that he heard from Eliot that George Moore had received “special rates.” In that case, Pound writes, he “can hardly reprove Eliot—if [Thayer has] put the thing on a commercial basis, for holding out for as high a price as he can get.” Pound insists that he does not “concur in his refusing to let [The Dial] publish the poem,” but maintains that it is Eliot’s right to negotiate.

April 30, 1922. Thayer replies to Pound, stating that he will not “waste further time answering letters such as that from Eliot,” as he has “already erred far upon the side of generosity in [his] correspondence with [Eliot].” Thayer “could take only as an insult” Eliot’s March 8 telegram. 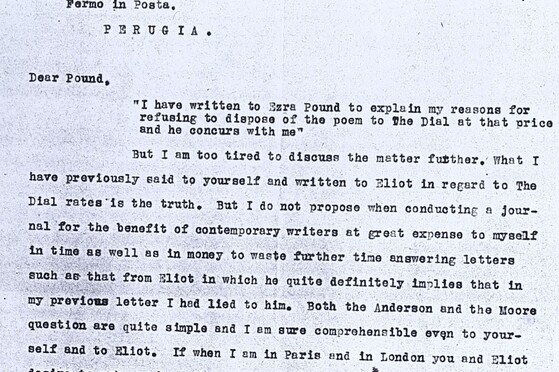 August 31, 1922. By August, a plan has taken form. As Seldes describes in a letter to Watson, The Waste Land will be published in book form by Boni and Liveright. The Dial will “pay them nothing and … publish the poem without the notes in [the] November issue.” The book will be published afterwards, and The Dial will buy 350 copies, with the intention of “push[ing] the book mightily in connection with [their] subscriptions.” Seldes has the idea of “number[ing] all the copies of the first edition, giving a bibliographical value to it.” There is still an echo of the earlier financial disputes: Eliot wants to make “the award the basis of a contract.” In any case, Eliot will receive the award of 2,000 dollars, and the publisher will not publicize the book using the award until the poem appears in The Dial.

August 31, 1922. Watson sends a telegram to Seldes, notifying him that “Eliot agrees in principle.” Eliot’s “letter constituted [a] contract regarding [the] award.” Watson directs Seldes to “make sure of Liveright,” and to “see Quinn and write [that the] Eliot matter is settled.” Watson is “enclosing [a] contract if Quinn thinks [his] letter to Eliot not sufficiently binding.” 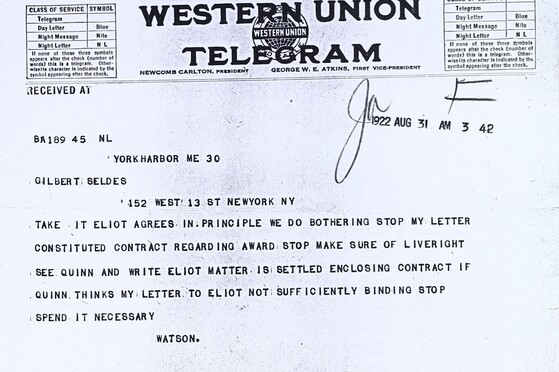 September 13, 1922. Seldes writes to Watson, informing him that The Waste Land, among other works scheduled for publication, is “up.”