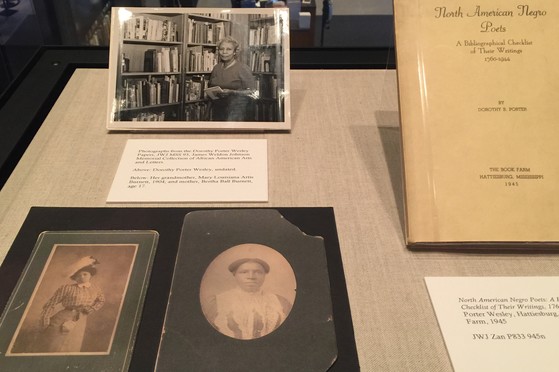 Every month in every year is Black History Month at the Beinecke Library, with resources available online, in the reading room, in the classrooms, and through exhibitions in every season.

A selection of books, photographs, a demonstration record, and comics drawn from the vast James Weldon Johnson Memorial Collection of African Arts and Letters is on view in February 2020, in two temoporary exhibition cases on the library’s mezzanine, for this Black History Month. The items showcase historian Carter G. Woodson and librarian Dorothy Porter Wesley, as well as Golden Legacy Illustrated History Magazine.

Carter Godwin Woodson was born in New Canton, Virginia, in 1875, the son of Anne Eliza (Riddle) and James Henry Woodson, both formerly enslaved persons. He earned his first bachelor’s degree from Berea College in 1903, another bachelor’s and a master’s degree from the University of Chicago in 1908, and a doctoral degree from Harvard University in 1912. In 1915, Woodson, William D. Hartgrove, George Cleveland Hall, Alexander L. Jackson, and James E. Stamps founded the Association for the Study of Negro Life and History. He began publication of the Journal of Negro History in 1916, which continues today as the Journal of African American History.

The Negro in Our History was first published in 1922, with numerous subsequent printings. Charles H. Wesley, later husband of Dorothy Porter Wesley, brought out a revised edition in 1962, after Woodson’s death in 1950. The first editions on view in the Beinecke Library’s 2020 Black History Month pop-up exhibit include the copy presented by Woodson to James Weldon Johnson, namesake of the library’s collection of African American arts and letters, which includes the James Weldon Johnson and Grace Nail Johnson Papers.

Woodson established the celebration of Negro History Week in 1926, choosing the second week in February and its birthdays of Abraham Lincoln (February 12) and Frederick Douglass (February 18). This celebration became Black History Month, first expanded by the Black United Students and African American educators at Kent State University in 1970, and designated nationally U.S. presidents since 1976.

Dorothy Burnett Porter Wesley (1905-1995) librarian, curator and bibliophile, was born on May 25, 1905 in Warrenton, Virginia to physician Hayes Joseph Burnett and tennis player Roberta (“Bertha”) Ball Burnett. Wesley, the eldest of four children, grew up in Montclair, New Jersey. She graduated from Miner Normal School, Washington D.C. in 1925 with the intention of becoming a teacher. Wesley worked as a library assistant in the Miner Normal School library where she worked with librarian Lula V. Allan who encouraged her to pursue a career in library science. Wesley enrolled in Howard University in 1926 and received a BA in 1928. After graduation from Howard University in 1928, Wesley began work as a full-time librarian at Howard University. In 1928 Wesley enrolled at Colombia University’s School of Library Science where Wesley received a Master’s in Library Science in 1931.

In 1930, Wesley began work as curator of the Moorland Foundation, now known as the Moorland-Spingarn Research Center, at Howard University and worked to build collections documenting the African diaspora until her retirement in 1973. Under Wesley’s administration, the Moorland-Spingarn Research Center became a world-renowned institution for the history and culture of people of African descent. After retirement, Wesley worked as a consultant for Radcliffe University’s Black Women Oral History Archive and authored several articles and books pertaining to librarianship and the African diaspora.

The Dorothy Porter Wesley Papers, JWJ MSS 93 total 190 linear feet (350 boxes) of correspondence, writings, biographical materials, research files, photographs, and personal papers. The 2020 Black History Month pop-up exhibit includes photographs of her, her mother, and her grandmother; her 1945 book, North American Negro Poets: A Bibliographical Checklist of Their Writings, 1760-1944; and a demonstration record for Folkways/Scholastic Records 1968 Panorama of Negro History: From 1492 to Today, with an image of Langston Hughes on the record sleeve, drawn from her extensive research files.

The JWJ collection also has thousands of photographs and other visual material. On view in the February 2020 pop-up exhibit are two examples of the popular culture materials in the JWJ collection: Golden Legacy, a line of Black history comic books originated by Bertram Fitzgerald in 1966. Fitzgerald wrote many of the 16 volumes published from 1966 to 1976, including Vol. 7 about Frederick Douglass, illustrated by Howard Darden. The Harriet Tubman volume was written by Joan Bacchus and illustrated by Tom Feelings. Other artists involved with the series included Leo Carty, Howard Darden, Ezra Jackson, Don Perlin, and Tony Tallarico. Fitzgerald distributed 9 million total copies of the magazine’s volumes, reaching countless schools, libraries, churches, and civic organizations. The JWJ collection also has a significant collections of Feelings’ artwork.