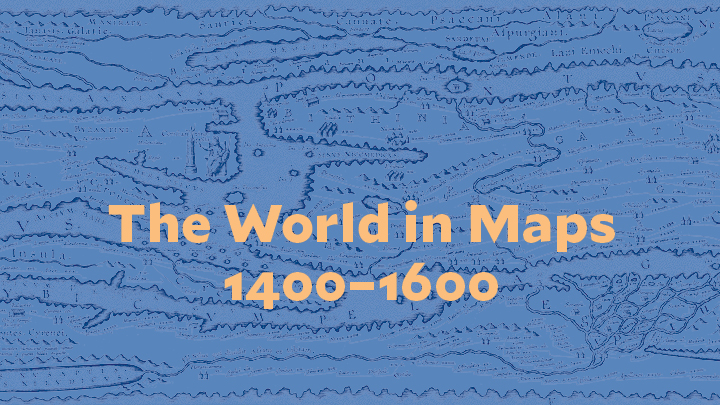 This exhibition presents many of the most historically significant manuscript maps from the late medieval and early modern period from the Beinecke Library’s vast collection of maps. It is focused on portolan charts - large, colorful charts that showed the shoreline of the Mediterranean, and were used by sailors to navigate from port to port. These maps were crucial to the expansion of European trade in the fifteenth and sixteenth century. Yale University Library has one of the most significant map collections of this period and owns some unique items not found in any other collection. When the holdings previously in the Map Room in Sterling Memorial Library were consolidated with Beinecke Rare Book and Manuscript Library collections in 2018, it formed the largest single repository of portolan maps in North America.
This exhibition presents maps from several different historical groups and demonstrates how maps functioned to place people within a larger world context. While primarily focusing on European maps, it also includes Middle Eastern and Asian world maps to illustrate common elements and also highlight significant differences. In addition, the exhibition presents some map forgeries and how they were determined to be fakes using scientific and historic analysis.
The flat display cases on the ground floor of the historic Beinecke Rare Book & Manuscript Library enable us to show twelve large maps alongside one another to allow the viewer to make comparisons between maps made at various periods and times in the crucial years surrounding the discovery, from the European perspective, of the new world.
END_OF_DOCUMENT_TOKEN_TO_BE_REPLACED END_OF_DOCUMENT_TOKEN_TO_BE_REPLACED

From Dati to d’Anville: Early Modern Europe and the Birth of the Atlas by James Akerman, Director, Hermon Dunlap Smith Center for the History of Cartography and Curator of Maps at the Newberry Library, Chicago.

More information and speaker’s biography. The lecture at 4pm will be followed by a public reception to celebrate the exhibition.

This afternoon workshop will feature the scientists and conservators at Yale University’s Institute for the Preservation of Cultural Heritage and Yale University Library in conversation with Ray Clemens, Curator of Early Books and John Paul Floyd, an independent historian working in Scotland.

The 1492 Aguiar map, the oldest dated Portuguese portolan chart in existence, dramatically demonstrates the world as Christopher Columbus and his crew would have seen it on their first voyage in 1492.  Along with the world map of Henricus Martellus (below), these maps indicate the real dangers Columbus faced and answer fundamental questions about his first voyage. This map is featured in the 2022 book by Alida C. Metcalf, Mapping an Atlantic World, c. 1500.

The World Map of Henricus Martellus

The Martellus world map, composed around 1490, is a stunning rare survival of the pre-exploration world. One of the largest maps in the collections, it is too large to be displayed along with the portolans, so a facsimile is on display in the public exhibition. The original is in the library’s courtyard level open to registered researchers. The map shows a very different perspective than the portolans–it is based on the ancient maps composed by Ptolemy, transmitted to Europe by Arab scientists and geographers.

The Beccari portolan chart (1403) is far older than the Aguiar map but contains a crucial cartouche that describes how map makers such as Beccari composed these maps, particularly their reliance on oral knowledge from sailors used to accurately measure the distances between ports. For this reason, Beccari’s map is one of the most studied by cartographers.

The Abenzara map is unique for entirely different reasons. Judah Ben Zara (or Abenzara) was one of a handful of Jewish cartographers in Europe that we know of and his religion had a profound effect on his maps and his life. Only three maps of his survive. It is the only portolan made on goatskin in our collection and it seems likely an adaptation to a climate that did not produce the larger animals that provided the skins for other portolans.

The infamous Vinland map will be shown, along with the material acquired with it that purported to support its authenticity in 1965.  We will also demonstrate the work done by the Institute for the Preservation of Cultural Heritage at Yale in 2019 to finally prove that the map was a fake. We will also show some recent forgeries acquired to allow historians and scientists to study the techniques forgers employ.